at the Thaya river 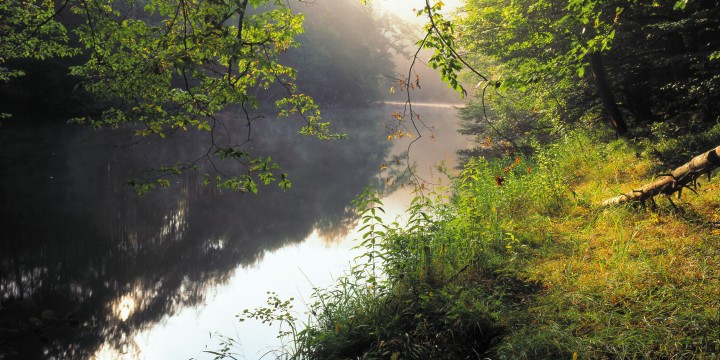 The Austrian part of the National Park covers 1.330 ha, 1.260 ha are nature zones and on 70 ha. of nature zone with management interference for the protection of ecosystems is authorized. The buffer zone comprises less than one hectare. The Czech Národiní Park Podyjí is 6.620 ha wide, of which 2.220 ha represent the core zone, 2.260 ha the care zone and 1.780 ha the buffer zone.

The Thaya River constitutes the common border over 25 km. However, the river length differs extremely from the bee-line distance, the latter being only 10 km.

The National Park Thayatal is located on a distinctive climate border. Whereas the eastern part is influenced by the dry Pannonian climate, the humid Atlantic climate dominates on the highlands of the Waldviertel. This is why continental and central European flora and fauna are interspersed in the National Park. The magic of the Thayatal near Hardegg lies in the particularly high diversity of plant species in a small area. The exposure changes constantly along the winding river bends, and the geological habitat factors also differ on a small-scale basis. This is reflected in the flora. In both National Parks 1.288 plant species have been identified so far. In comparison: in the whole of Austria there are 2.950 varieties of plants.

Birds are of a similar diversity: in the sole Austrian part, over 100 bird species could be identified (more than 150 in both National Parks), and almost 80 of them breed in the Thayatal. Once disturbances have been reduced even further, the sea eagle, now only a winter guest, may be breeding here again too.

A current study confirms the occurrence of more than 500 types of lichen, some of them discovered for the first time in Austria. Among the 950 species of butterflies, there are many moths which are rather unremarkable. The 20 types of bats are an indicator of the good environmental conditions these animals find here.

In the annual programme you will find offers for children and families, exciting animal observations, large festivals, culinary offers and interesting seminars.
The visitors programme is as colourful and versatile as nature in the National Park Thayatal. The Thayatal offers a variety of opportunities to enjoy nature and discover fascinating aspects of biology.
The programme is held in German.

Simply enjoy the National Park and stay overnight at the Smart Motel!

This website uses cookies to improve your experience while you navigate through the website. Out of these, the cookies that are categorized as necessary are stored on your browser as they are essential for the working of basic functionalities of the website. We also use third-party cookies that help us analyze and understand how you use this website. These cookies will be stored in your browser only with your consent. You also have the option to opt-out of these cookies. But opting out of some of these cookies may affect your browsing experience.
Necessary Always Enabled
Necessary cookies are absolutely essential for the website to function properly. These cookies ensure basic functionalities and security features of the website, anonymously.
Analytics
Analytical cookies are used to understand how visitors interact with the website. These cookies help provide information on metrics the number of visitors, bounce rate, traffic source, etc.
Functional
Functional cookies help to perform certain functionalities like sharing the content of the website on social media platforms, collect feedbacks, and other third-party features.
SAVE & ACCEPT
Powered by