A subterranean walk of delights 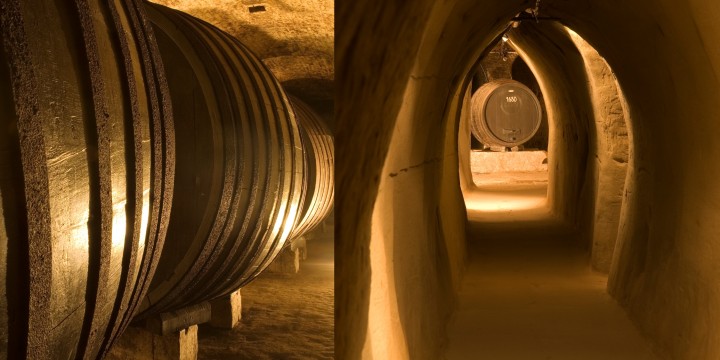 The privilege issued by Emperor Friedrich lll to the town of Retz in 1458 was the primary cause for the extension of its cellar vaults. This and subsequently issued privileges granted every citizen the legal right to trade with wine.

In accordance with the privilege issued by the Hungarian king Mathias Corvinus, ten suburban villages had to submit the fermented wine by Martini (November 11th) to Retz.

Thus already in the Middle Ages (like today) the wine was fermented in the cellars of the wine-growers. The town cellars were therefore only intended for the storage and maturing of wine. Every citizen who already possessed a cellar beneath his house began enlarging it according to his requirements. The majority of these cellars were not only extended length-wise, but also branched off into tunnels of various levels, creating split-level cellars with two or three “floors”. Most of the cellars in Retz are interconnected on one level, and altogether the cellars stretch to about double the surface of the streets above ground. A dimension merely alluding to the gigantic quantities of wine previously stored here!

Part of the cellars are as old as the town itself, which was founded in 1278 after the battle at Dürnkrut – Jedenspeigen. The cellars could be dug beneath the previously built town houses due to the geological situation: The town rests on a mighty 30 meter deep sea sediment of quartz sand, as it once was the coastal area of the Eggenburg Sea which, in the early tertiary period (Miocene), washed the eastern slope of the Bohemian granite-gneiss plateau as well as the present calvary hill in our area. The cellars were originally dug directly into the sand and neither supported nor brick-lined. Above the sand deposit is a comparatively thin layer of loam, protecting the cellars from precipitation. Due to the permanently moist sand, the air humidity is constant at 88% in the cellars, whereas the temperature ranges between 8 to 10 degrees Celsius. The ideal conditions for the storage of wine.

This website uses cookies to improve your experience while you navigate through the website. Out of these, the cookies that are categorized as necessary are stored on your browser as they are essential for the working of basic functionalities of the website. We also use third-party cookies that help us analyze and understand how you use this website. These cookies will be stored in your browser only with your consent. You also have the option to opt-out of these cookies. But opting out of some of these cookies may affect your browsing experience.
Necessary Always Enabled
Necessary cookies are absolutely essential for the website to function properly. These cookies ensure basic functionalities and security features of the website, anonymously.
Analytics
Analytical cookies are used to understand how visitors interact with the website. These cookies help provide information on metrics the number of visitors, bounce rate, traffic source, etc.
Functional
Functional cookies help to perform certain functionalities like sharing the content of the website on social media platforms, collect feedbacks, and other third-party features.
SAVE & ACCEPT
Powered by